How The Feminine Can Feel More Confident At Work 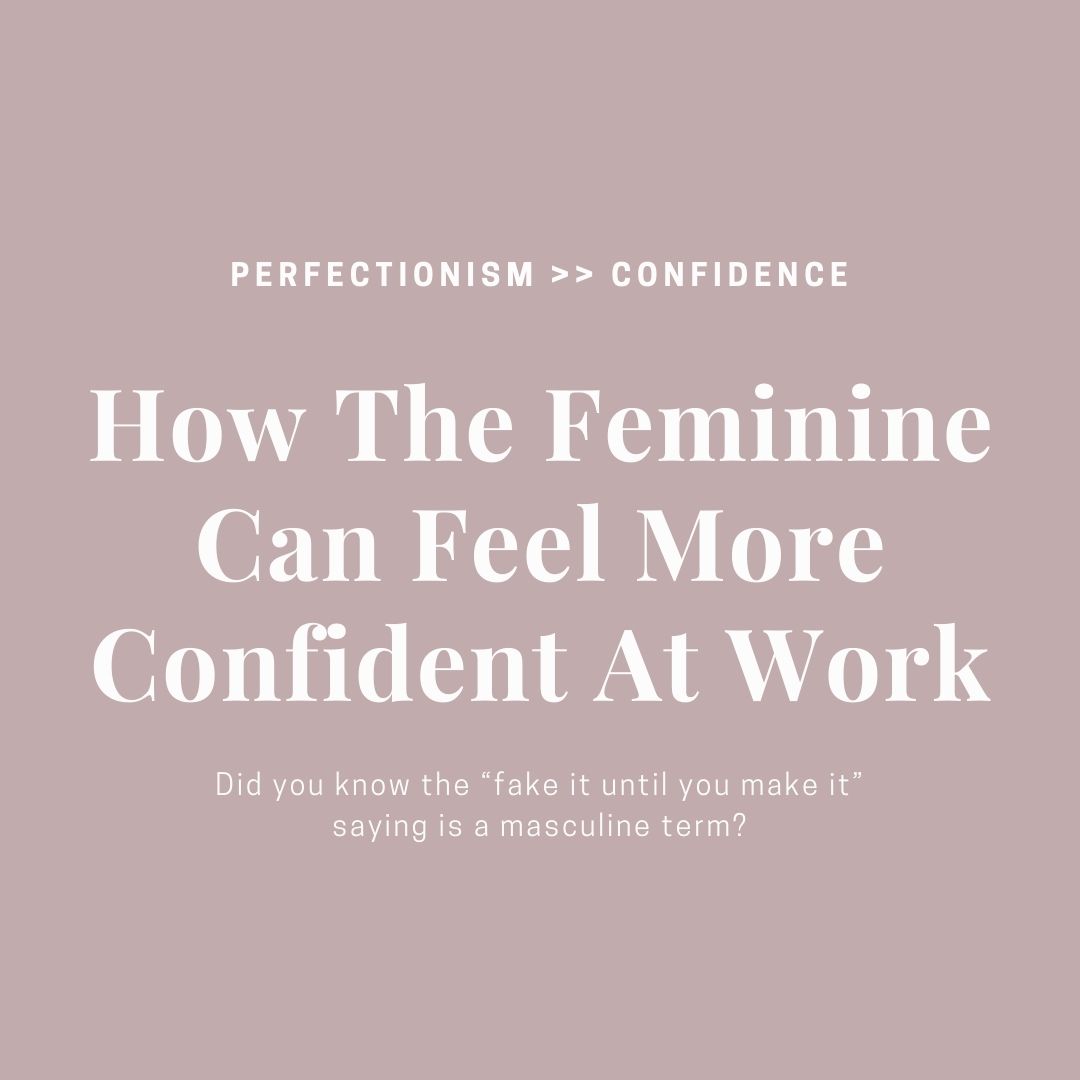 Did you know the “fake it until you make it” saying is a masculine term? The masculine typically goes about a task by looking at what it CAN do over what it can’t, weighed up by its talents. The feminine on the other hand will look at a task as a whole, identifying every part and assess its potential based on any problems and requirements.

Example: A job advertisement goes up online. The masculine will look at the job description and identify all the things it knows it can do, and apply to the job. It ignores all that it can’t do. The feminine will look at the job description as a whole, weighing up everything it can do against what it can’t, and is less likely to apply for the job if there’s too many “cants”.

Research from the Hewlett Packard found that; if your more dominant energy core is the masculine, you’re likely to apply for the job even with just 60% of the job qualifications, while if your more dominant energy is the feminine, you are likely to look for another job advertisement where you meet 100% of the requirements. The difference, the masculine might think; “I’ll fake the 40% I can’t do until I make it” if they were to become successful and bag themselves the job. The feminine however, will use the “cant’s” to down play their talents, distrust their abilities and view itself less than perfect- because ultimately, perfection is the goal- wrong! Perfectionism is a HUGE barrier to the feminine and a major confidence killer.

Perfectionism makes you risk-averse, filled with doubt, and keeps you from taking actions that build your skill of confidence. Apply this thinking to the workplace environment and the masculine is far more confident than the feminine. Although confidence is a super key attribute at work. Researchers at the University of California Berkeley believes confidence helps people gain respect, prominence and influence in the eyes of others. Confident people tend to be more admired, listened to and have more sway over the group’s discussions and decisions. In a nutshell, if the feminine lacks confidence, by contrast, the masculine is becoming listened to and admired.

To give some personal context, as someone with a feminine energy core, I often feel like a counterpart to my colleague who is someone with a masculine core. Although similar age, qualification and experience, I have always felt like I’m never listened to by our manager, and in turn, I play small and struggle to speak out. Except there’s a catch 22 issue here. The quieter I stay, the more space I give to my colleague to speak up (with a 60% masculine vision), the more I put myself down and the lower my confidence sinks.

The feminine needs to get out of this catch 22 cycle, by showing an infinite amount of confidence. In this instance, I could advise the “fake it until you make it” attitude, but I believe this saying to be bullshit (I’m sure you’ll hear me bang on about this the more blog posts you read)! The secret to confidence, in fact, lies in action! Even when you don’t feel it. I get it, it can feel like an extra push when we’re already drained and exhausted. Self-doubting is tiring! Low confidence breeds hesitation and inaction, but if you ‘push’ yourself to actually take action, you get out of your head, into motion and you’d start to perform even better–which actually builds confidence (the real way, not the faking it kind of way). How can the feminine get into action to raise its confidence at work? …. By working WITH the masculine energy rather than AGAINST it. Here’s how:

Reflecting on your work process as you go can help you to realise all that you have accomplished and remember that you ARE a valuable member of the team. I encourage you to celebrate the little wins and this can be a simple as a high five with a colleague to a mid-week glass of wine (and if you’re like me-both). In doing so, it strengthens work engagement, increases productivity and boosts confidences as the result. And then…. when you want to finally ask for that raise, you’ll have the mindset to access all the things you HAVE done (little things, as well as the big things) and you’ll have a greater list of reasons why you’re deserving of it and have impeccable value to your works company!

In my work life, I’ve had a fair few day of comparing myself to colleagues, as they received credit for submitting work they picked up, right before the deadline. Yet, the three months of work I produced leading up to the deadline went un-noticed. Of course, deep down I know that the work I inputted was appreciated but the end result of comparing myself to them was only a negative downer on my confidence! All of the preparation, planning, and behind the scenes work is important, but it’s never the work that’s going to lead to any advancement in your career. What is however, is making ourselves visible. An example of how a can be visible to our employers is speaking out in meetings and sharing our creative ideas. With that said, this isn’t easy when it doesn’t come naturally to us. In fact, it doesn’t come naturally to anyone at first without a whole load of practice! The only way to dampen that initial fear is through preparation, script notes and content review. You could start off small in speaking out, with statements of agreement or opinion and eventually push the boundaries of your comfort zone by offering to present a project.

Actively seek to align your workload and to-do list with your employer’s project objectives, communicating with their masculine in the process. Prioritising tasks based on what’s most valuable to the outcome rather than what seems the most fun to do. Although this may mean we have to put the mundane tasks first, it shows our employers that we can proactively strategies (a very masculine trait) and the work you produce will be appreciated, building our confidence in turn.

Go out of your way to complete other tasks you’ve not been asked to do. Use your intuition (a feminine trait) to identify what needs to be done and act on it, even if you don’t know how. Remember that 60-100% between the masculine and feminine? The feminine tends to let perfectionism get in the way and so, are more likely to solve problems or find out how to do something, rather than going ‘all gun blazing’ and ‘faking it until you make it’. That’s a strength of the feminine! Start to push yourself to take on any problem you see–and do your best to solve it. Taking action helps boost confidence.

If you fail however, which you might, complete a lessoned learned journal. In your own words, make note of the new things you’ve taken on, what you learned, what’s currently work and what’s not. This isn’t something that needs to be documented as you go but at the end of a project. Research has found that this practice encourages innovation and risk-taking as employees become less afraid to make a mistake. Companies such as Google and Facebook try to embrace this, understanding that tasking risks helps boosts confidence as it’s a means of showing your employer that you are someone who isn’t afraid of taking on new things.

Dating back to our tribal ancestors, the feminine has always struggled with saying no for it wants to be liked and accepted and evolved into people pleasing. In modern days, it’s not easy saying no to out colleagues or employers, if not harder than saying no to friends or family. We spend most of our time working and so, we place a huge importance on our jobs. At work we need to get clear on our priorities, and so, anything that’s going to deter us from those, directing us away from the project outcome, we need to be brave and gently decline. Remember, you aren’t saying no to the person, bur rather the task itself. Offer guidance instead or refer them to a source to turn to that you think could help them. If its your employer doing the asking, go back to the to-do list and get clear on the what’s most valuable to the project, as mentioned in point three.

When trying to strategically prioritise, some employers might respond with something like “everything needs to get done” with an expectation of you to do overtime or stay late. If this is just a one-off, you might need to bite you tongue, but if this is consistent, then please know that you are a human, not a robot. Your own time and well-being is just as important as your work. Just like it is important to say ‘no’ to tasks that aren’t a priority (point 6), its also important to say ‘no’ to being available all the time.  If you don’t take care of yourself, it’s impossible to show up as your most confident self. Research shows that today’s pressure to always be accessible has left more than half of workers feeling burned out and in desperate need of a reset button. The WHO worked out that its actually costing companies more money if employees aren’t working as productively due to burn out. With the feminine being more susceptible to worry, perfectionism, problem solving, and for women in particular; general tiredness from biological hormones (yes, we push the limits or our energy during our periods, showing up each and every day), its more prone to burn out than the masculine. Know that REST is important and the ‘downtime’ outside of work is important. We should never put work over things like sleep, getting time outdoors, exercising, spending time with friends and daytime movement (sitting in a chair all day is sooo bad!). You can’t be your most confident self, ever, if you’re feeling burnt out. Each morning, I like to give myself ‘me’ time for 30 minutes, as a non-negotiable. This could look like dancing around my bedroom to the radio, or a longer shower than usual, or a meditation and yoga or journaling. In addition to this, whilst brushing my teeth, I always tell myself what my “going home” time is going to be. Unless something major comes up, I do my best in sticking to this. If I let slip with my boundaries, I know my employers will think it’s ok to ask me again and again and again to stay late- trust me, I’ve trailed and tested it!

PS. I offer a one hour coaching session all around building confidence. If you want to dive into any of these steps at a deeper level, I’ve got you covered! Head over to my website to find the kick start hour! Click Here For More Information

← The Femininst Vs. The Feminine and Sex Forgiveness really is... the path to spirituality →